it’s been a while I think probably maybe
two years since I bought this bike it’s
one of three
this is Kent La Jolla – the sequel and
following up on how the bike spin first
the last six hundred ninety nine mile
okay so it’s one of three bikes I have I
write it occasionally usually rides are
between 16 and as much as forty miles
typically 26 you’re probably watching
this because you want to know if the
bike call buffering that I know a lot
people like to pop in a lot of videos
and get a quick answer so I’ll give you
the quick answer and 700 miles for $6.99
the only thing I’ve done to it is
readjust the wheel bearings at 350 400
miles and I just readjusting the bottom
bracket bearing which is the bearing
that’s how has been here which is more
maintenance than I ever had to do with
my trek 930 that I bought in 1994 the
sketch about five thousand miles on it
but not killer it didn’t cost anything
so my opinion still is it’s a nice bike
now at this point what I’ll do is I’ll
well I guess one other thing I’ll I’ll
show both we’re hanging on is how true
the wheels are haven’t done anything to
the wheels I weigh a little less than
200 pounds I bounced up and down curbs I
hit five holes so I’ll show you the
wheels there’s the front wheel spinning
now if you can see it looks there’s a
leaf stuck to it but if you watch by the
fork it does have a little hop in it but
not terrible
they just hit the tripod it looks a
little wobbly but not bad
there’s the rear wheel I think it might
actually have a little little wobble on
not much
hopefully not effects raining you might
have noticed they did change a few
things on the bike
I took the decals off initially and it’s
this bike with the Reds or rather orange
rims just screamed hot rod to me so I
had to put some flames on it so I went
through all Riley’s and I bought those
stickers may be corny but I like it the
other thing I did watch again may be
kind of stupid but I wanted more right
on the bike so I painted over the head
badge with red nail polish my wife had
as far as I hauled the bikes holding up
again you’ll notice right it’s a headset
there that nut just give off a little
rust on it my care of the bike has not
been pristine but got a little rust
there little rust on the axle nuts I’ll
eventually paint them but quick release
for the post is held up playing a paint
on the frames all the flying I did swap
out a couple parts my son wept because
he said I spent more on accessories than
what the bike cost he’s probably right
these are these players are performance
greenway players they’ve got that little
Ridge in the middle but they’re still
knobby pretty good rolling resistance
the these tires weigh one pound less a
piece makes a little more than upon
what’s the piece and the players that
came on the bike the other thing I
changed out there’s a seat post you see
I’ve got a micro adjust bike niche bar
seat post that nacked about another half
pound off the bike right now as you see
the bike with my bike bag on or at waist
between 24 and 25 pounds which isn’t too
shabby I swapped out the seat for a
showing cruiser seat I’ve used these on
my other bikes
the comfortable nice and wide but not
like the tractor seat comes on the bike
I don’t know if there was a weight value
than that or not continue to run with no
kickstand so I guess that’s about it
overall on great bike but do expect to
have to do a little maintenance on that
after like I said I redid the wheel
bearings that between 350 and 400 just
adjusted them and now at 700 they
readjusted the bottom bracket that’s it 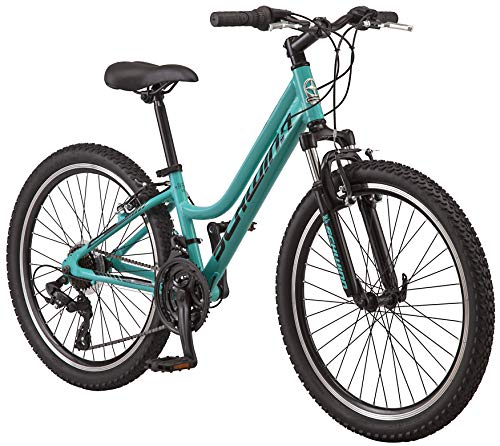 The 26 inch Kent La Jolla cruisers women’s bike is an excellent bike which is both comfortable and simple to handle whilst providing you with an enjoyable ride overall. The bike has an elegant style. The company has included a mix of pink and purple colours to cater for their target group and provide greater flexibility. The company has reduced the number of men’s and women’s bikes, it features in its stock to concentrate on bikes suitable for women.

The bike has smooth and light pedals which are made from aluminum alloy rims which have chrome finishes. This gives the bike a stylish look. The bike has a conventional design where the saddle is placed on a high-mounted frame. The company claims that this permits the saddle to stay in perfect position when you are riding and is in line with the bike’s suspension. The bike comes with a conventional fork which is made from a one piece construction and is therefore very light, making it easy for riders to increase the amount of long rides they undertake.

There is a large selection of bikes that are available from the Kent company. These include a cruiser bike, a cruiser’s bike, a women’s bike and also a moped. Each of these bicycles have different features which make them unique and which will help you choose which one suits your requirements better.

The cruiser bikes come with single speed, dual chain guides, front and rear braking systems, disc brakes and a sleek modernistic look. The cruiser bike is suitable for riders who would like to have a bike that gives them the performance they want without getting out of hand and increasing their cycling rate too quickly. If you want a bike that you can use for longer distances and who would like to do more than just a single speed ride, then the single speed bike will suit you best.

The cruisers are lighter bikes with a comfortable seat and a durable, modern design. The aluminum frame is strong and has been built on a lightweight framework so it is very light overall and so you can really get an idea of how well the bike rides when you take it out for a test drive. A Kent La Jolla cruiser will give you an extremely comfortable ride, even when you are using the power you have gained by using single speed. The aluminum frame allows the wheels to remain fixed throughout your entire ride and this in turn, increases your stability as you go over uneven surfaces and increases your control at high speeds.

The women’s bike is similar in style to the cruiser bike but it has more modernistic features which will look great on anyone. It is equipped with wide tires, which enable you to enjoy smoother rides and more agility during your rides. The women’s kiddie bike comes with a smooth riding engine and also features a comfortable seat. The aluminum frame provides smooth performance and you can see the performance you gain when you use a Kent La Jolla bike during your daily commutes. You will not only get a great ride, but also a stylish one.

You’ve got the classic American bike riding culture with the Kent La Jolla men’s cruiser bike. This California brand is about quality and durability as well as a stylish ride that has been built by people who understand their motorcycles and are passionate about giving them the best. Their products are made to last, which means you’re getting an awesome bike that will last long into the future. These bikes can be ridden in any sort of weather and have been designed for anyone from beginning to advanced bikers. When it comes to your comfort and safety, you don’t want to mess with a company like this – you need a company that knows their stuff!

If you’re looking for a bike that gives you everything you need from the rider’s standpoint, then the Kent La Jolla men’s cruiser bike is definitely for you. It’s got everything you could ask for in a bike – including an aluminum frame that is lightweight yet strong. It’s got great suspension and is designed for the rider’s comfort and confidence. The hand controls give you a complete range of riding options and make riding comfortable no matter what your style of riding might be. For added ease of riding, you can also add some other accessories like a windshield, mud flaps, and rear shocks.

The best bikes come from Kentucky’s finest, and this is true for the Kent La Jolla men’s cruiser bike. It’s got top-notch technology that puts you in control every time. You’re not just riding a bike – you’re riding a lifestyle. That’s what makes a bike – a lifestyle! Get your own bike today!

The Kent La Jolla women’s cruiser bike is a great women’s bike for any women who wants to go out and have a good time while being in the city or on the beach. The bike has an all weather semi-rigid aluminum frame that is lightweight and made for long distance rides. The seat and handlebars are well designed with high quality components so that your legs will feel good and you won’t be tired easily while riding. The bike also comes with a rear rack carrier for a longer range of transport.

The LaJolla by Kent Bicycles features a classy and timeless design for women who want to look tough while getting some good exercise. The frame is lightweight and made with a durable, semi-rigid all weather material. The bike also has a classy and vintage looking black finish that complements the beautiful silver and white, wide tire with plush cushions. The saddle has a comfortable upright riding position and a soft padded seat and levers for the foot controls. The shock absorbing dual suspension front and rear shocks with V-brakes and disc brakes make a strong, comfortable ride.

Bring your bike and make it even easier to take with you by renting it through their website. This is a great opportunity for women to meet other women and make new friends. You can also take advantage of special deals at the shows including early entry into the fair and the ability to purchase tickets online. The more you promote the event and continue to spread the word about it – the more people you will reach and the more bike riders you will have around.